Wired Magazine has conducted a “Living by Numbers” health conference in New York City, drawing together experts and leaders involved in medicine, science, technology, and business to share their perspective on the progress and future of healthcare. The underlying theme of the “Living by Numbers” conference was the gathering and applying of information regarding our health to improve the prevention and treatment of injuries and sickness. 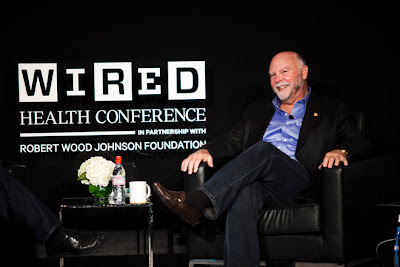 Image: Craig Venter discusses 3D DNA printers at Wired’s Living by Number Health Conference in New York City. The technology, systems, and policies presented at the event are neither good nor evil – they are only what those who wield them make them out to be. Currently much of this technology is controlled by large corporations, institutions, and organizations. By getting better informed and involved in the development and use of this technology, we can ensure that this technology is used for the greater good of humanity, rather than leveraged against it for the benefit of a technocratic elite.

The implications of the conference were far reaching in both the profound positive impact the emerging technologies and systems presented could have, as well as the vast capacity for abuse that each possesses.

The term “tracking” was prevalent throughout the talks. Several presenters revealed that data collected from Google and Facebook were regularly used in research, specifically for predicting trends almost instantaneously.

Of course, in the context of these talks, such methods were presented as being purely beneficial in regards to spotting pandemics and improving healthcare efficiency. Smart products including phones and home appliances were presented that could record data, be used for health monitoring, and even replace or augment existing medical devices.

There were implantable sensors that could log data and monitor vital signs, and GE and Google executives talking about taking a more active, not to mention Orwellian and intrusive role in employees’ habits and lifestyles, and how technology and information-gathering could make such efforts more effective.

There were also talks involving technology such as 3D DNA printers, presented by Craig Venter, that if widely disseminated into the hands of an informed, technically complement medical community, could vastly improve healthcare and regenerative medicine, as well as strip the monopolies, and all the dangers associated with them, from large biotech firms like Monsanto, Bayer, and Cargill.

Coupled with the concept of “self-tracking” presented by Tim Ferriss, and increasingly cheaper and more capable medical equipment making it into the hands of better informed patients as mentioned by Eric Topol of the Scripps Research Institute, we see a possible future quite the opposite of anything Orwellian. But it is also a future large corporations are already arraying their resources against to prevent from coming into fruition.

Ultimately, the conference was about technology. Technology is a double-edged sword; how it is wielded depends mostly on the hands it is held with. Currently, this technology is in the hands of large corporations, institutions, and organizations. And while many of those involved in the development of these networks, technologies, and policies are well-intentioned, the danger exists that those at the very top, the same corporate-financier interests that fund policy think-tanks that engineer wars as well as economic and political manipulation on a global scale, have truly malevolent intentions.

This is a real problem. Perhaps the problem. Technology has reached a point where the very building blocks of what makes us human can be manipulated and controlled to such an extent, it can either liberate us from disease, injury, and even aging, or render us permanently and irrevocably inferior to those who control this technology.

Likewise, the control and use of digital information can create either a tool of infinite benefit, or a vast, invasive, inescapable control grid. Coupled together, exists either a technological utopia, or an Orwellian nightmare, all depending on who controls the technology – a malevolent elite, or humanity as a whole.

The key to solving this problem is by simply getting informed and getting involved.

The more informed, technically competent people that become involved in the development, use, and improvement of this technology, the more difficult it will be for any corporation or institution to monopolize and leverage the technology against others, ensuring that it is used for the collective benefit of humanity.

As technology in general continues to advance and costs continue to go down, the tools once used solely by large corporations, institutions, and organizations are now becoming available to local schools, community laboratories, and independent researchers and developers. While there are many fears of this technology getting into the hands of people intent on creating catastrophes, it must be remembered that the technology will also make it into the hands of many more people interested in defending against such catastrophes.

The choice between an Orwellian nightmare or a technological utopia is entirely up to us. We can choose to be perpetually paralyzed by political ploys, crass, superficial distractions, and shallow consumerist endeavors, or we can choose to assert our own collective will above that of the corporate-financier interests who have for so long dominated humanity and seek to dominate it to an ever greater degree.

We can assert our will by becoming informed and involved in the very disciplines that build a modern civilization – engineering, design, and sciences of all kinds. If we can do this individually, even in the smallest way, taking even but a single step forward in the right direction, collectively we can begin replacing the existing paradigm in great strides.

Tony Cartalucci’s articles have appeared on many alternative media websites, including his own at Land Destroyer Report.