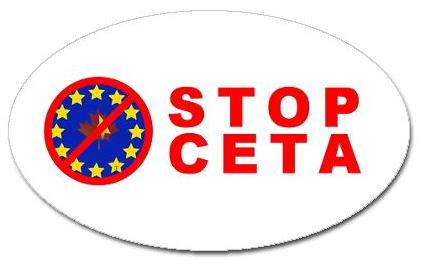 The shadow of the Anti-Counterfeiting Trade Agreement (ACTA) is back in Europe. It is disguised as CETA, the Canada-European Union and Trade Agreement. As reported by EDRI, a rather strange and surprising e-mail was sent this summer from the General Secretariat of the Council of the European Union to the Member States and the European Commission. The e-mail explained that the criminal sanctions provisions of the draft CETA are modeled on those in ACTA.

A comparison of the leaked draft Canada-EU agreement shows the treaty includes a number of the same controversial provisions, specifically concerning criminal enforcement, private enforcement by Internet Service Providers (ISPs), and harsh damages. These provisions are particularly problematic, and were the key reasons why the European Parliament rejected ACTA.

However, given the lack of transparency associated with the CETA discussions (both Canada and EU insist that the draft text remain secret), the concerns that CETA may replicate ACTA appear to be very real despite denials from some members of the European Commission.

CETA is a trade agreement designed to strengthen economic ties between Canada and the EU through “free” trade and increased investment. However, hidden within this treaty are provisions that were essentially lifted from ACTA word-for-word. And just like its close cousins, ACTA, KORUS, and TPP—and other trade agreements that are applauded by the entertainment industry for carrying expansive intellectual property provisions—CETA is being negotiated in secret.

The only hard evidence on which we can base our analysis suggests the worst: once again, the European Commission and the EU Member States governments are trying to impose repressive measures against cultural practices online. (…) This trend of sneaking repressive measures through negotiated trade agreements must stop.

This cut-and-paste strategy was confirmed yesterday by La Quadrature du Net, which had representatives present in a workshop on October 10th, where Philipp Dupuis, the European Commission negotiator, bragged that ACTA-like criminal sanctions were still in the CETA draft. Following the workshop, La Quadrature du Net sent letters to Mr Pierre Moscovici, Minister for Economic Affairs and Finance, requesting clarifications and demanding that the criminal measures be removed from CETA.

The 92% of the European Union Parliament who voted against ACTA in July 2012 demonstrated that the EU was overwhelmingly against provisions like this, and many expected that it would be the end of the matter. Sadly, that assumption appears to have been unfounded. Despite this there are encouraging signs of resistance—including that the Dutch government has stated that it would not accept CETA moving forward this way.

Civil society, which has mobilized and filled streets of France, Poland, and others, is calling on citizens to demand that their governments remove copyright provisions from CETA during the upcoming round of negotiations next week in Brussels.

The Consolidation of Policy Laundering and Increasing Secrecy in International Negotiations

The copyright lobbies have consolidated on the use of foreign and international forums as an indirect means of pushing policies—a strategy known as policy laundering—like those ones in CETA that might never win direct approval through the regular domestic political. The move from fora like the World Intellectual Property Organization (WIPO) or the World Trade Organization (WTO) to bilateral and regional trade agreements confirms it. Policy laundering takes advantage of the fact that the institutions nations have created for ensuring democratic control and input into the bureaucratic policymaking process have not yet been instituted into most international bodies and negotiation venues. And of course, the entertainment lobby applauds this. It is well known for instance, that provisions of the US DMCA were the result of policy laundering. This should not be the way we build 21st century agreements.

International negotiations are abstract and it’s hard to see how they may eventually affect one’s life. When a trade agreement or treaty is signed by a country and later ratified however, it does manifest itself into national law. Therefore, the time to act is from the very beginning of such initiatives, not later. Secrecy around negotiations is not democratic, violates the open government principles many of the negotiating countries have signed onto, and purposefully makes taking action much more difficult.

Secrecy impacts civil society’s ability to comment or analyze agreements, just as it does with the Trans-Pacific Partnership agreement (TPP) and other FTAs. It’s hard enough to work within the participation system at places like WIPO, but at least there we are given some opportunity to observe and participate in the official discussions. When trade negotiators and copyright maximalists get together to launder IP rights expansion through secret agreements, we lose that small but vital voice that lets us speak truth to power.

Please visit The Electronic Frontier Foundation for the latest news in electronic privacy.

9710 9828 5909 2608 4182
Previous : Government Claims Americans Have ‘No Reasonable Expectation of Privacy’ With Cell Phone Usage
Next : Breaking The Zombie Programming