Some two and a half years after the BP oil spill, Greenpeace has obtained emails and photos from a U.S. government agency that reveal the extent to which the government tried to shield the public from the wildlife casualties of the spill.

The Guardian reports that the FOIA-obtained documents show that shortly after the Deepwater Horizon disaster the National Oceanic and Atmospheric Administration (NOAA) witnessed several whales coated in oil near the site of the spill and one large sperm whale that had died.

[T]he discovery of the decomposed carcass set off a flurry of emails – with repeated instructions from NOAA officials to crew aboard the Pisces not to release information or photographs.

The crew were also directed to obtain samples from the whale to try to determine if it was killed as a result of the spill, and to mark the corpse….

NOAA did put out a press release about the dead whale . However, the release was edited and shortened in a way which appeared to minimise the effects of oil on whales.

The article notes that this information is not only important for the public to be aware of; it also will help determine BP’s final pay-out amount to the government. Indeed, BP “still faces claims from the federal government for environmental damages, and accounting for wildlife killed as a direct result of the spill – from dolphins to turtles to whales – will be critical to the final bill.”

Here’s a (rather gruesome) image of the dead sperm whale, as obtained by Greenpeace from the NOAA: 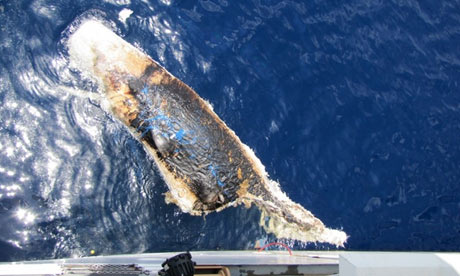 Unsettling as that image is, the sheer number of creatures harmed by the BP spill are even more devastating. For instance, these eyeless shrimp are among the many deformed sea creatures found in the wake of the BP spill: Meanwhile, an unusually high number of dolphins, many of them calves, were found in early 2011. Researchers believe the spill played a role. (image via University of Central Florida )

Clicking through Greenpeace’s Gulf Oil Spill photo set on Flickr is a gut-wrenching reminder of the spill’s impact on the region’s environment and wildlife. Take for instance this pelican, which was being evaluated by members of the Tri-State Bird Rescue and Research team. Lauren Kelley is the activism and gender editor at AlterNet and a freelance journalist based in New York City. Her work has appeared in Salon, Time Out New York, the L Magazine, and other publications.
Read More
[mailpoet_form id="1"]