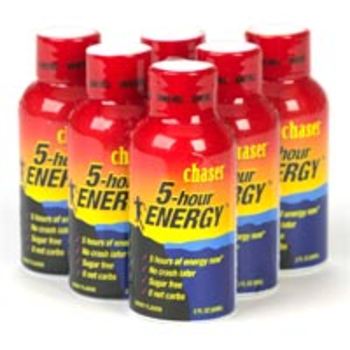 Researchers continue to discover more evidence that all of those energy drinks, which are pushed by high-profile athletes, sports companies and the mainstream media, are not just bad for you, they are downright dangerous.

Officials with the Food and Drug Administration say they’ve received reports of 13 deaths over the last four years where there was at least a causal link to the brand 5-Hour Energy, an energy shot that contains a potent amount of caffeine.

The New York Times said that the disclosure of the reports is the second time in weeks that filings by the agency cited deaths linked to energy drinks. In October, the FDA said it had received five reports involving fatalities that were linked to another popular energy drink, Monster Energy.

The drinks have a growing history at the FDA. Since 2009, 5-Hour Energy has been included in about 90 filings with the agency; more than 30 involved serious or life-threatening problems such as heart attack, convulsions and at least one spontaneous abortion.

‘We are unaware of any problems with our product’

Granted, the simple filing of an incident with the FDA does not mean a certain product caused death or harm or even contributed to it. But clearly the products in question are increasingly mentioned in reports to the government’s investigative health agency.

Living Essentials of Farmington Hills, Mich., the distributor of 5-Hour Energy, did not respond to inquiries from the Times, and the company’s top executive refused to be interviewed. But in a statement, the company claimed its product was safe when used as directed, adding that the firm was “unaware of any deaths proven to have been caused by the consuming” of its product.

Since disclosure of reports linking Monster Energy to potentially harmful incidents, the company has said repeatedly that its products are safe, insisting that the drink was not the cause of any health problems.

The fast-growing energy drink industry has been facing increased scrutiny over the past few years over labeling disclosures and potential health risks, the paper said. The growing concern has stretched all the way to Capitol Hill, of course, as a number of lawmakers have begun calling on the FDA to increase regulation of energy drinks. In addition, the New York State Attorney General’s office is investigating the practices of several of the drink producers.

There are differences in the drinks themselves. Brands like Red Bull, Monster Energy, Rip It and others actually look like beverages, but 5-Hour Energy is sold as a two-ounce shot. And while the company doesn’t disclose how much caffeine is in each container, a recent story by Consumer Reports said it was about 215 milligrams.

That’s about double the caffeine content in an eight-ounce cup of coffee, which can contain between 100 and 150 milligrams.

At present, the FDA says it doesn’t have the scientific evidence to regulate caffeine any more than the agency already does. Officials say the issue is made more complex by the fact that some high-caffeine drinks, such as Red Bull, are currently sold under FDA rules, while others, such as 5-Hour Energy and Monster Energy, are sold as dietary supplements.

Different categories, different rules and reporting requirements – neither of which would matter if better, more specific labeling of ingredients in all food products were the rule rather than the exception.

In an interview with the Times, Daniel Fabricant, director of the FDA’s division of dietary supplement programs, said the agency was looking into death reports citing 5-Hour Energy. But he said so far, the data was inconclusive.

He said the 13 death reports mentioning 5-Hour Energy had all been submitted to the agency by Life Essentials, but only because since 2008, dietary supplement producers have been required to notify the FDA when they are made aware of a death or other serious health incident that could be tied to their product.