In what may be one of the most severe flu seasons in recent history, the CDC has warned more is to come.  This week, CDC officials say due to the influx of the widespread flu season, there are shortages of the drug used to treat the flu. While the CDC is working to address the “spot shortages”, it does not bode well for the public who are already dealing with a severe flu season and one that could potentially get worse with new flu strains emerging.

“Even if the hopeful assessment by the U.S. Centers for Disease Control and Prevention bears out, there will still be an additional 11 weeks to 13 weeks of flu circulating across the country. “In general, we see things peaking right about now, but that means there is still a whole lot more flu to go,” Dan Jernigan, [director of the influenza division at the National Center for Immunization and Respiratory Diseases]  said. ‘In addition, there are other strains of influenza still to show up that could be a major cause of disease.’ 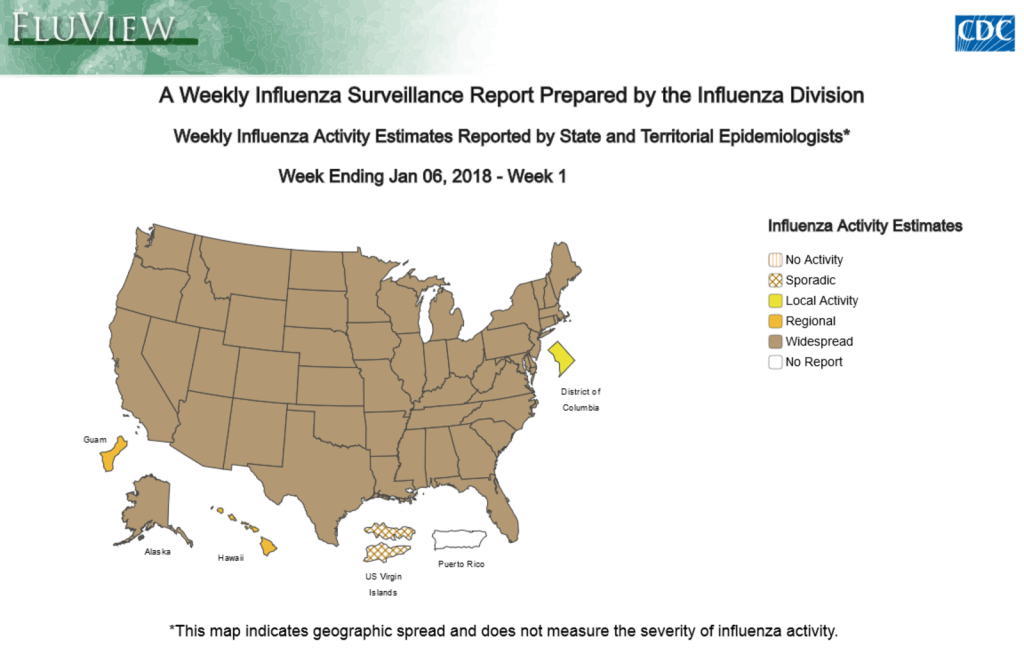 That may already be happening. The CDC is starting to see infections caused by the H1N1 strain of the virus in states grappling with high levels of the H3N2 strain, the predominant version this season. In addition, Jernigan said, yet another type of flu caused by influenza B viruses is expected to show up later in the season.

H3N2 has compounded the damage usually wrought by the annual flu outbreak. It’s known for both its severity and ability to evade the protection provided by vaccinations that are typically more effective against the other types of flu.” (Source)

With flu-related deaths continually rising, some hospitals are experiencing five times the number of influenza patients than they typically see and many medical facilities are introducing protocols to help limit flu exposure to the healthy population.

Some hospitals have set up triage stations outside of the ER for patients suffering from the flu. This will help screen, examine and if needed, admit flu patients. Both Loma Linda University Medical Center and La Mesa Hospital in California have done this to help limit flu-infected patients from entering the hospital and provide more expedient care.

Other protocols that medical centers are implementing are limiting visitors from entering the hospital. The University of Chicago hospital was one of the first to announce a flu contingency for the patients. Weeks ago, when the flu season was just coming to its peak, the hospital announced it “will not allow children under age 12 and those with a fever, cough, sore throat, runny nose or nasal congestion will not be allowed to visit patients. More hospitals around the country are adopting similar protocols and limiting visitors exposure to patients who have flu-like symptoms.

How the Flu is Spread

Experts at the CDC believe the flu is spread three different ways.

We all know the importance of washing our hands during the flu season, but it’s should be emphasized that avoiding crowded places can also prevent the flu. Shopping malls, airplanes, bus stations, houses of worship, concert halls and residential living quarters like nursing homes, and college dormitories are all flu-prone areas. Moreover, introducing children to these environments only increases your risk of catching the flu. Children exhale larger amounts of virus and they are able to transmit the virus for even longer periods than adults.  That said, preschools and schools often spread the flu quickly due to the close contact and lack of frequent hand washing children tend to have.

Hospitals and medical offices are also high-risk areas where one can come in contact with the flu. Pay attention to “high touch surfaces” such as doorknobs, light switches, telephones, table surfaces, railings, and handles can all be infected with the flu virus. Other high touch areas are subway or bus poles, ATM machines, pens and pencils from banks and stores, etc. The best way to combat this is by frequently disinfecting your hands and taking necessary precautions. If you feel that you may have contracted the flu and need to go out in public, wear a face mask.

With an ineffective flu vaccine, medical care facilities stretched thin, flu medicine shortages, and new flu strains on the horizon this could be the perfect storm. Extra precautions must be made. Limit your exposure to the flu by avoiding crowded places and high touch surfaces. As well, if you feel you are coming down with the flu, stay home and do not risk infecting others. With 11 weeks left in the flu season, this could quickly become a health crisis.

Tess Pennington is the editor for ReadyNutrition.com. After joining the Dallas chapter of the American Red Cross in 1999, Tess worked as an Armed Forces Emergency Services Center specialist and is well versed in emergency and disaster management and response. Tess is the author of The Prepper’s Cookbook: 300 Recipes to Turn Your Emergency Food into Nutritious, Delicious, Life-Saving Meals. When a catastrophic collapse cripples society, grocery store shelves will empty within days. But by following Tess’s tips for stocking, organizing, and maintaining a proper emergency food supply, your family will have plenty to eat for weeks, months, or even years.