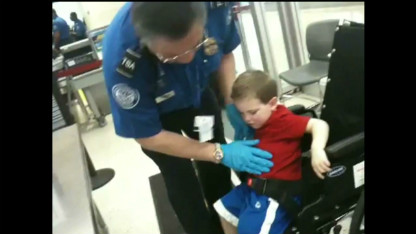 A TSA agent from Cleveland has been arrested for allegedly raping a young boy, just the latest example of an employee of the federal agency being accused of child molestation while carrying out pat downs of children on the job.

Returning from Germany, the TSA screener, who remains unnamed until he is charged, was arrested on a warrant at Newark Airport in New Jersey.

The man was arrested on suspicion of sexually molesting a young boy from Northeast Ohio.

The TSA worker was a former mentor with the Big Brothers Big SIsters organization in Cleveland, which allowed him to get access to children including his victim. The organization said it was aware of the case but refused to make any further comment.

The alleged rape took place last year, after which the TSA screener went to Germany to continue working for the federal agency. What the man was doing working in Germany when he is an employee of an agency of the U.S. government has not been divulged.

According to 19 Action News, the rape incident traumatized the boy to such an extent that he seriously contemplated suicide.

This is just the latest incident involving a TSA screener, many of whom are tasked with conducting invasive pat downs of children at airports, being charged or accused of child molestation.

As a report earlier this year by Tennessee Congresswoman Marsha Blackburn highlighted, the fact that TSA agents are so routinely caught engaged in criminal behavior is by no means an aberration but stems “from TSA’s hiring practices and insufficient use of background checks.”

This includes the TSA’s recruitment policy which, instead of representing an “intelligent risk-based organization,” actually fails to conduct criminal and credit background checks on many of its employees while advertising “for employment at the Washington Reagan National Airport on pizza boxes and on advertisements above pumps at discount gas stations in the D.C. area.”

Back in May it emerged that a Catholic priest who had been defrocked over allegations of child sex abuse was subsequently hired by the TSA to work at Philadelphia International Airport.

This is just one of a number of examples of TSA agents being accused or charged with crimes related to the sexual abuse of minors or child pornography.

A mother was found guilty of disorderly conduct by a court in Tennessee last month after she complained about TSA agents conducting a pat down on her 14-year-old daughter.

Paul Joseph Watson is the editor and writer for Infowars.com and Prison Planet.com. He is the author of Order Out Of Chaos. Watson is also a host for Infowars Nightly News.