The Obama administration has spent the past several months in secret diplomatic negotiations aimed at building a new Syrian opposition leadership structure that it hopes can win the support of minority groups still backing President Bashar al-Assad.

The strategy, to be unveiled at a Syrian opposition meeting next week in Qatar, amounts to a last-ditch effort to prevent extremists from gaining the upper hand within the opposition and to stop the Syrian crisis from boiling over into the greater Middle East.

The Post also indicates that de facto “administrative zones” are being set up along the Turkish-Syrian border with “nonlethal” assistance provided by the United States, France and “other like-minded governments.” The so-called “Syrian National Council” is being discarded, as it is wholly seen as illegitimate by both Syrians and the world at large. 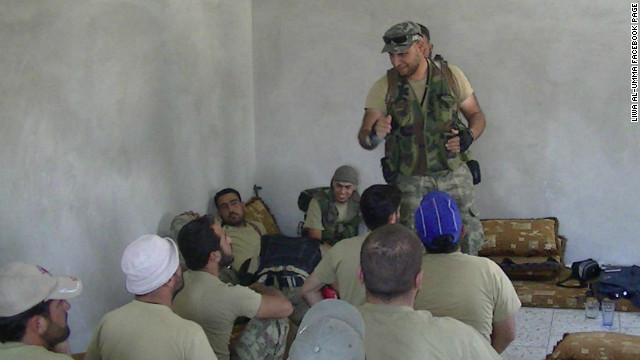 Image: Will the West’s new “resistance front” in Syria officially include Libyan Mahdi al-Harati of the US State Department, United Nations, and the UK Home Office (page 5, .pdf)-listed terrorist organization, the Libyan Islamic Fighting Group (LIFG)? Here he is addressing fellow terrorists in Syria. Harati is now commanding a Libyan brigade operating inside of Syria attempting to destroy the Syrian government and subjugate the Syrian population. Traditionally, this is known as “foreign invasion,” not rebellion.

The SNC, Clinton said, should no longer be considered the ‘visible leader’ of the opposition.

‘There has to be a representation of those who are on the front lines, fighting and dying today to obtain their freedom,’ she said during an unrelated visit to the Balkan states. ‘. . . And we also need an opposition that will be on record strongly resisting the efforts by extremists to hijack the Syrian revolution.’

It is clear that both the West’s political proxies, and its armed militant proxies have been compromised and the narrative that tentatively worked against Libya, is now unraveling and failing against Syria.

While the US attempts to portray this latest move as an attempt to “prevent extremist elements from gaining the upper hand within the opposition,” it must be remembered that as early as 2007, US officials had admitted that efforts to overthrow the governments of Syria and Iran would include primarily US, Israeli, and Saudi armed extremists drawn from across the Arab World, and sent into Syria to create the very sectarian bloodbath now unfolding. Rhetoric of “freedom” and “democracy” serve merely as cover within which foreign military aggression is couched.

This was first exposed by Pulitzer Prize-winning journalist Seymour Hersh in his 2007 New Yorker report titled, “”The Redirection: Is the Administration’s new policy benefiting our enemies in the war on terrorism?”

In the report it specifically stated:

To undermine Iran, which is predominantly Shiite, the Bush Administration has decided, in effect, to reconfigure its priorities in the Middle East. In Lebanon, the Administration has cooperated with Saudi Arabia’s government, which is Sunni, in clandestine operations that are intended to weaken Hezbollah, the Shiite organization that is backed by Iran. The U.S. has also taken part in clandestine operations aimed at Iran and its ally Syria. A byproduct of these activities has been the bolstering of Sunni extremist groups that espouse a militant vision of Islam and are hostile to America and sympathetic to Al Qaeda. –The Redirection, Seymour Hersh (2007)

Hersh’s report would continue by stating:

the Saudi government, with Washington’s approval, would provide funds and logistical aid to weaken the government of President Bashir Assad, of Syria. The Israelis believe that putting such pressure on the Assad government will make it more conciliatory and open to negotiations. –The Redirection, Seymour Hersh (2007)

The link between extremist groups and Saudi funding was also mentioned in the report, and reflects evidence regarding the origin and backers of similar extremists who flooded Iraq during the US occupation, sowing sectarian strife and killing Western troops alike:

…[Saudi Arabia’s] Bandar and other Saudis have assured the White House that they will keep a very close eye on the religious fundamentalists. Their message to us was ‘We’ve created this movement, and we can control it.’ It’s not that we don’t want the Salafis to throw bombs; it’s who they throw them at—Hezbollah, Moqtada al-Sadr, Iran, and at the Syrians, if they continue to work with Hezbollah and Iran. –The Redirection, Seymour Hersh (2007)

Image: (Left) West Point’s Combating Terrorism Center’s 2007 report, “Al-Qa’ida’s Foreign Fighters in Iraq” indicated which areas in Syria Al Qaeda fighters filtering into Iraq came from. The overwhelming majority of them came from Dayr Al-Zawr in Syria’s southeast, Idlib in the north near the Turkish-Syrian border, and Dar’a in the south near the Jordanian-Syrian border. (Right) A map indicating the epicenters of violence in Syria indicate that the exact same hotbeds for Al Qaeda in 2007, now serve as the epicenters of so-called “pro-democracy fighters.”

It was exposed in “NATO Using Al Qaeda Rat Lines to Flood Syria With Foreign Terrorists,” that indeed, the very networks used by Al Qaeda to flood Iraq with foreign fighters is now being used by the United States, NATO and the Persian Gulf States of Saudi Arabia and Qatar to violently overthrow Syria. The narrative that recent US efforts aim at heading off “extremists” from “hijacking” the armed violence in Syria, is exposed as a blatant lie. Extremists have constituted the so-called “opposition” from the very beginning, by design, with explicit US, NATO, Saudi and Qatari funding, weapons, and support. 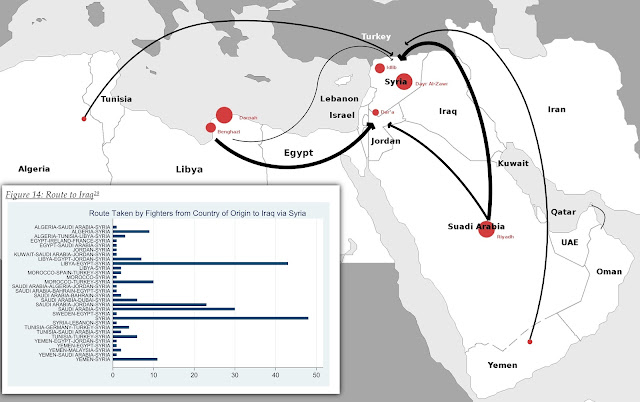 Image: The most prominent routes into Syria for foreign fighters is depicted, with the inset graph describing the most widely used routes by foreign fighters on their way to Iraq, as determined by West Point’s 2007 Combating Terrorism Center report “Al-Qa’ida’s Foreign Fighters in Iraq” (page 20). These same networks are now being used, with the addition of a more prominent role for Turkey, to target Syria directly. (Click to enlarge)

Tony Cartalucci’s articles have appeared on many alternative media websites, including his own at Land Destroyer Report.