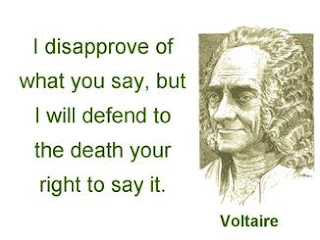 What would free speech icon Voltaire say about the political and social marginalization of the 9/11 truth movement?

“Have patience awhile; slanders are not long-lived. Truth is the child of time; erelong she shall appear to vindicate thee.” – Immanuel Kant.

“A public can only arrive at enlightenment slowly. Through revolution, the abandonment of personal despotism may be engendered and the end of profit-seeking and domineering oppression may occur, but never a true reform of the state of mind. Instead, new prejudices, just like the old ones, will serve as the guiding reins of the great, unthinking mass.

All that is required for this enlightenment is freedom; and particularly the least harmful of all that may be called freedom, namely, the freedom for man to make public use of his reason in all matters. But I hear people clamor on all sides: Don’t argue! The officer says: Don’t argue, drill! The tax collector: Don’t argue, pay! The pastor: Don’t argue, believe!” – Immanuel Kant.

The dethroning of sacred narratives and sacred myths in a culture is impossible without a free press. No such institution exists in the West, which explains why the official 9/11 story is still considered a sacred narrative in the Western mind eleven years after the traumatic events.

There is censorship in the mainstream media, and most of it is self-censorship, as heroic British journalist Alan Hart said in this interview. What this proves is that America and the Western world is just as totalitarian as the Islamic Republic of Iran and the religion of Islam.

The Muslim world’s intense reaction to the anti-Islam film which originated from America is a reminder that blasphemous offenses to totalitarian cultures and religions are not tolerated. People want their beliefs to be validated and consider them sacrosanct. Both rational criticism and monstrous insults are forbidden.

In Islam, Muhammad’s image can’t be criticized because it is sacred; in the West the official 9/11 story can’t be criticized because it is sacred. The claim that there is freedom of speech in America and the West is a big lie. Sure, you can criticize Islam and foreign countries, but there are social and political restrictions upon speech when the 9/11 lie or the crimes of Israel are brought up for discussion.

The vicious trick that is used to cover up this blatant double standard is the “conspiracy theory” label. This label is the peaceful way of cutting off a heretic’s head in the West. It is less savage than the Islamic method of dealing with heretics and blasphemous disbelievers, but it is just as effective.

People who use the label “conspiracy theorist” in a debate about the 9/11 events are intellectual savages who have the sword of error in their hand. They can’t win the battle of ideas with rational arguments so they pull out their sword and tell you to submit to the official U.S. line on 9/11 or face the axe of ridicule. The individuals who refuse to kneel are branded as “conspiracy theorists,” and “crazy truthers.”

This has to be the dark ages because we’re definitely not living in an enlightened civilization. We are going through another episode of collective madness in the history of mankind.

There is so much censorship in the U.S. and the West that when one little fact about 9/11 penetrates through the fog of propaganda it is viewed as a big success. And censorship is not even the biggest barrier to truth. The religious nature of the 9/11 story makes it that much more difficult for the voices of reason in the 9/11 truth movement to get anywhere with people who are still in denial.

It’s not the fog of propaganda that blocks the penetration of the truth about 9/11, but the sky of religious thought that dominates how people think about 9/11. Millions of people are religiously wedded to the official account of 9/11. Saying 9/11 was an inside job in the West is like saying Muhammad was a pedophile in the Muslim world. The reaction to 9/11 truth statements is blind rage, hate, and contempt. And it is deeply religious.

The Muslim extremists who are burning American flags in response to a stupid anti-Islam film (at least that’s how it appears on the surface) are just as irrational as 9/11 truth deniers in the West who symbolically burn 9/11 truth documentaries and books by rejecting them as “conspiracy theories.” The difference is a matter of degrees.

Preventing the circulation of ideas, facts, and opinions is the worst crime in society. The Stalinists and Goebbelites who hijacked the American government under the cover of terror are as bad as the torturers of the Inquisition. But there is at least some sort of civilized society left because the truthers haven’t been burned yet.

It speaks to the political development of America and Western civilization that Western governments have not used violence against the truthers to intimidate them into silence and crush dissent.

But even if violence is used in the future, it cannot stop the truth about 9/11 from being known. The 9/11 truth movement will continue to expand because it is based on rational arguments, public evidence, and the use of reason.

On September 11, 2012, Glenn Greenwald spoke about the current state of knowledge about the 9/11 events and the political handling of new 9/11 findings in a conversation with Sam Seder, host of The Majority Report. Greenwald said:

“Well, one of the things that is really kind of remarkable is that the idea of the 9/11 Commission was supposed to be that given the magnitude of this attack it was vital to have a comprehensive account of what took place that would be free of partisanship and that everyone could trust as the official version of the events.

And even more than ten years later, we’re on the 11th anniversary today as we’re talking, large parts of the 9/11 Commission report itself remain classified. There have been very prominent politicians like Bob Graham, who was the Senate Intelligence Committee Chairman at the time, and others who have said that in particular the role of very influential Saudis in the attack and financing the groups and the terrorist circle responsible for these attacks have been very aggressively shielded by a U.S. government that continues to have this very close alliance with the Saudis.

And so, never mind a sort of future investigation, even the one we have is still very much suppressed in lots of material ways. And I’m not sure that there really is an outcry or will be an outcry. I think you’ll hear some Democrats, you know, trying to exploit this newest revelation to blame the Republicans for the 9/11 attack, and, as you say, exactly many of the same ones will be demanding that torture be not looked into on the grounds that we have to look forward and not backward.

But I think that by and large the country was successfully persuaded that the attack was essentially an act of evil by foreign radicals who hate the United States and that the leadership of our country responded rather well. And I’m not sure there’s really an opportunity, even given the large amounts of evidence, to change that narrative among large numbers of people.” – Glenn Greenwald, in a conversation with Sam Seder, host of The Majority Report, on September 11, 2012. [listen the quote from 25:44 – 27:48 in the video].

Greenwald says that the reason why it is difficult to change collective perceptions of the U.S. government, the U.S. media, and American society in general is the power of the American mythology to blind the American people to the reality of present day America. He said:

Americans believe that we have a free country, which means we have a free and vibrant press, that acts of our government are subjected to real scrutiny and accountability through our institutions designed to check power like courts and the media. And that this is an important thing for us to believe, that we are a beacon of freedom and press freedom, and that propaganda and tyranny and oppression only happens in these other countries like North Korea and Iran and whatever the U.S. enemy of the week is.

And so to believe that the American people have been radically deceived about critical historical events, and that this truth has been hidden, really calls into question all of those mythological assumptions about how we like to think of ourselves. And to really start believing that those things are true we have to abandon those assumptions about how we think of ourselves and that’s an unpleasant, difficult, and painful thing to do. And I think the desire to really embrace this exceptionalism by continuing to believe that basically the truth is being told to us by our government and by our media aids and abets the ability to deceive in a fairly fundamental way.” [Listen the quote from 31:31 – 33:01 in the video].

It is inevitable that the 9/11 mythology will collapse. No earthly political authority can suppress the truth and the cry of justice. The voice of reason will have the last say in the 9/11 debate, not totalitarian propaganda and political fantasy.