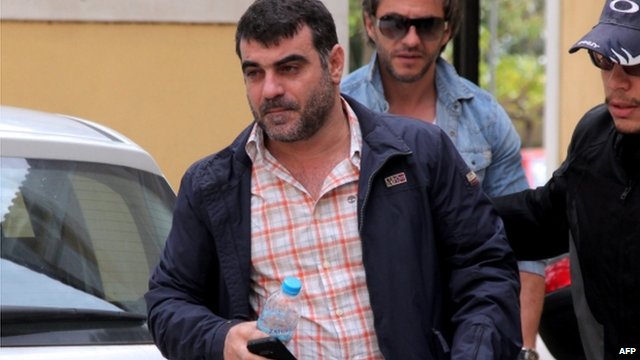 As police arrived at Mr Vaxevanis’ home he said: “I did nothing more than what a journalist is obliged to do”

A Greek journalist has been arrested after publishing a list of about 2,000 Greeks who hold accounts with the HSBC bank in Switzerland.

Kostas Vaxevanis has been charged with breach of privacy.

Mr Vaxevanis says the list he published is the same one that was given by the then French finance minister Christine Lagarde to her Greek counterpart.

Some of those named, said to include many prominent Greeks, are suspected of using the accounts for tax evasion.

The list was originally leaked by an HSBC employee and then handed over by Ms Lagarde to Greek authorities two years ago, according the the AFP news agency.

Since then, successive Greek governments have been accused of trying to cover it up.

“Instead of arresting the tax evaders and the ministers who had the list in their hands, they’re trying to arrest the truth and freedom of the press,” Mr Vaxevanis said.

The “Lagarde List” has angered Greeks hit by austerity measures.

He is due in court this coming week to answer the charges after publishing the names in his Hot Doc magazine.

“The prosecutor issued a warrant for Vaxevanis’s arrest because he published a list of names without special permission and violated the law on personal data,” a police official told Reuters.

The names on the list are said to include politicians, businessmen and others, sparking fury among ordinary Greeks as they are hit by deep austerity measures, says the BBC’s Mark Lowen in Athens.

The issue has reignited claims that tax evasion remains rife in Greece, and that the authorities still are not serious about tackling it, our correspondent adds.