WikiLeaks founder to be co-author of book entitled Cypherpunks, despite being confined to Ecuadorean embassy in London 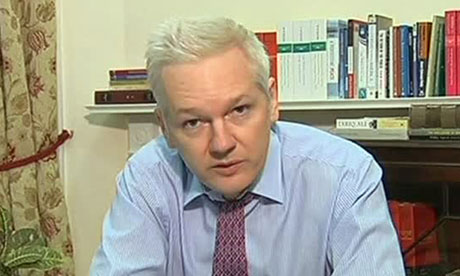 Julian Assange, confined to the Ecuadorean embassy in London, appears on Russia Today to criticise Barack Obama. He is also now to publish a book. Photograph: AP

Julian Assange‘s last foray into the publishing world ended in an acrimonious and highly costly dispute, after he withdrew from his million-pound contract and his publishers released a draft autobiography manuscript against his wishes.

Now confined to the Ecuadorean embassy in London after being granted asylum, the WikiLeaks founder has announced he is to publish a new book about the internet, freedom and what he terms “the resistance”.

The book, entitled Cypherpunks: Freedom and the Future of the Internet, will be published in paperback and electronically on 26 November, the US publisher OR Books told the New York Times. Three “cutting-edge thinkers and activists from the frontline of the battle for cyberspace” are listed as co-authors: US-based Jacob Applebaum, Jeremie Zimmermann from France and German Andy Müller-Maguhn.

The text is largely based on a transcript of an interview Assange conducted with the three others for an episode of his TV show, The World Tomorrow, broadcast in June on the Russian state-funded channel RT, Zimmermann told the Guardian. But he said there would be “plenty of added content”.

Zimmermann, the co-founder and spokesman for the citizen advocacy group La Quadrature du Net, said he had insisted on a bottle of whisky and some cigars during the interview, “to make the discussion more fluid, cosy and friendly”.

The announcement comes a year after the publication of Julian Assange: The Unauthorised Autobiography, which was issued by the publishers Canongate against the Australian’s wishes after he withdrew from his contract but failed to return his advance.

Last week Canongate blamed the collapse of its deal with Assange, reportedly worth a total of £930,000, for operating losses of £368,000 last year. The published book, based on an early draft manuscript, was a dramatic flop, selling only 644 copies in its first week of release.

Assange has been living in a small room in the Ecuadorean embassy in west London since June, when he sought asylum, arguing that his imminent extradition to Sweden to answer accusations of sex offences put him at risk of onward removal to the US, where he fears espionage charges.

The central American country granted his asylum request in August, but the UK authorities have insisted he will be arrested if he tries to leave the embassy.

Colin Robinson, co-publisher of OR Books, said Assange had made the initial approach to the publisher, which claims to “embrace progressive change in politics, culture and the way we do business” and deals directly with readers, cutting out booksellers and sales teams. The format of the book had evolved in discussions, he said, but more than half of it was new material.

“The issues they are discussing – how do you create an internet where secrecy by governments and powerful institutions is minimised and privacy for ordinary people is guaranteed? – are complicated questions,” he said.

Learn More: Julian Assange to publish book about freedom and the future of the internet | Media | guardian.co.uk