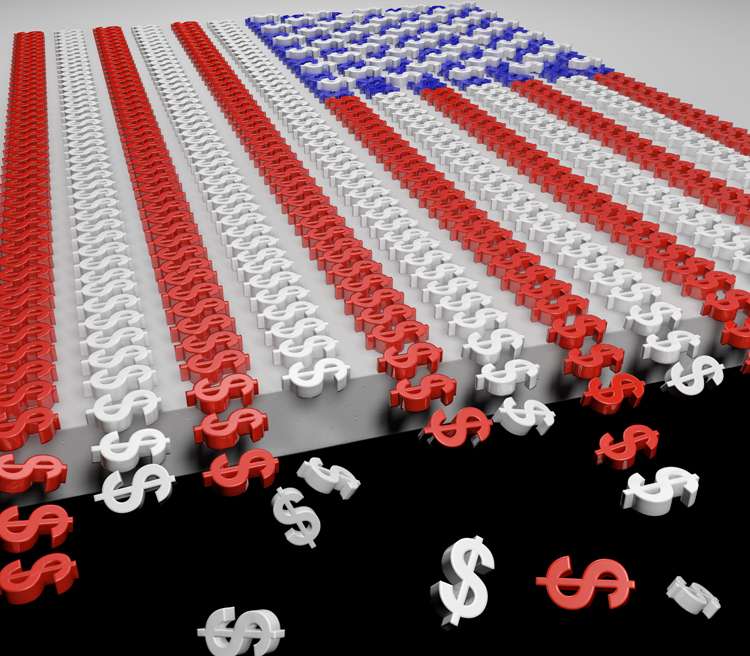 He predicted an eventual house of cards collapse. Only its timing remained uncertain. He’s not around to see what won’t be pleasant when it arrives.

It’s too early to know for sure, but monetizing debt/excess money printing may have hit a wall. One economist suggests Bernanke can’t do much more in the mortgage market.

He’s harming banks more now than helping them. Net interest margins “face the mother of all squeezes.” The Fed’s beginning to lose influence.

Production is down. Hiring plans are weakening. Layoff announcements suggest many more to come. Main Street America has been in Depression since 2008. Reality for most people is dire. Things aren’t improving. They’re worsening.

New millennium opportunity “disappeared. Middle class jobs are scarce. Indeed, jobs of any kind are” hard to get. Most are low wage, few or no benefit ones. Households need two or more to get by.

“The lack of jobs, especially high value-added, high productivity jobs, is the reason real median household income has declined and the distribution of income has worsened. Without rising real household income, there cannot be a consumer economy.”

Roberts repeated his earlier prediction that America is being third-worldized. A decade ago he expected it in 20 years. It might arrive sooner than he thought.

The combination of militarism and permanent wars, prioritizing imperial dominance, and shifting wealth mindlessly to corporate favorites and America’s 1% at the expense of people needs assures a future best lived elsewhere. “A country so poorly led can do nothing but decline.”

What about an entire continent cratering. Financial analyst Graham Summers explained what few of his peers will touch. European banking problems are huge.

The Eurozone’s largest banks are insolvent. On average, they’re leveraged 26 – 1. Lehman was at 30 – 1 when it collapsed.

For the EU overall it’s 434%. For America it’s 400%. “(B)ankrupt banks (operate) in bankrupt countries,” says Graham. “The entire financial system is based on the assumption that European sovereign bonds are still risk free.”

“So you have bankrupt nations selling bonds to insolvent banks, which then” lever 26 – 1. It’s madness and ignored by mainstream observers.

Europe is doomed, believes Graham. It can’t “get out of this mess unless the entire union (grows) at over 10% for a decade.”

Now’s the time to prepare for trouble, he stresses. Central banks may have no magic bullets left. They’re scared to death but won’t admit it.

He adds that Spain is way beyond saving. Collapse is coming. The euro is doomed. The EU will eventually break up. Reality may arrive within a few months or less after America’s elections. It makes no difference who wins.

Other analysts also forecast impending market trouble. Some think 2008 will pale in comparison. The late Bob Chapman predicted it years ago. He said expect protracted/unprecedented hard times. Don’t bet against him being right.

Profits are being squeezed for the first time in three years. Revenues are on a similar glide path. Perhaps they’re precursors of things to come.

Euro Pacific Capital’s Peter Schiff says what happened in 2008 “wasn’t the real crash.” The “real (one) is coming.”

Financial author Harry Dent expects up to a 60% market decline. “We have the greatest debt bubble in history. We will see a worldwide downturn. And when you are in this type of recessionary environment stocks should be trading at five to seven times earnings.”

Before the 2008 crash, hedge fund manager John Paulson made about $20 billion shorting the US housing market. Now he’s betting heavily against the euro.

Investor Jim Rogers warns about an impending “Financial Armageddon.” He expects it post-US elections. He’s extremely critical of monetary madness. The world is “drowning in too much debt,” he stresses.

The Fed, ECB and Bank of England bear most responsibility. They’ve abused their “license to print money.”

America’s $16 trillion debt comes to over $50,000 for every US citizen. “The solution to too much debt is not more debt. What would make me very excited is if a few people (in government) went bankrupt.”

Obama and Germany’s Merkel especially promote dangerous policies. They create an illusion of economic stability. In reality, they only buy time.

“Mrs. Merkle has an election next year. Mr. Obama has (one) in November. The Americans and the Germans – they want to do everything they can to hold the world up until after” electoral season ends.

“It’s going to be bad after the next election.” How bad remains to be seen. An influential economic team expects serious trouble. They discovered a “frightening pattern.” It looks catastrophic.

“We found an identical pattern in our debt, total credit market, and money supply that guarantees they’re going to fail,” he said. “This pattern is nearly the same as in any pyramid scheme, one that escalates exponentially fast before it collapses. Governments around the globe are chiefly responsible.”

“And what’s really disturbing about these findings is that the pattern isn’t limited to our economy. We found the same catastrophic pattern in our energy, food, and water systems as well.”

Everything could implode at the same time, he thinks. “Food, water, energy, money. Everything.”

“Most frightening of all is how this exact same pattern keeps appearing in virtually every system critical to our society and way of life,” he said.

“It’s a pattern that’s hard to see unless you understand the way a catastrophe like this gains traction. At first, it’s almost impossible to perceive. Everything looks fine, just like in every pyramid scheme.”

“Yet the insidious growth of the virus keeps doubling in size, over and over again – in shorter and shorter periods of time – until it hits unsustainable levels. And it collapses the system.”

Most Americans are uneasy but don’t understand the true dangers they face. They never do until it hits them hard. For many it’s irreversible.

“If our research is right, Americans will have to make some tough choices on how they’ll go about surviving when basic necessities become nearly unaffordable and the economy becomes dangerously unstable.”

“People need to begin to make preparations with their investments, retirement savings, and personal finances before it’s too late.”

Few do, and what works best isn’t easy for most people to fathom. Worst still is too few have much, if anything, to sustain them.

On October 28, Global Research published “37 Facts About How Cruel This Economy Has Been to Millions of Desperate American Families.”

It makes grim reading. Millions of households have few, if any, savings. The net worth of nearly one-third is “zero or less than zero.”

Poverty is rising exponentially. America’s middle class is disappearing. Over “41% of all working age Americans are not working.”

One-fourth of working Americans earns sub-poverty wages. America has the highest percentage of workers earning low pay than any other industrialized economy.

At the same time, homeless shelters and food banks can’t keep up. Demand is growing at a time Washington, states, cities, and smaller communities provide less and plan more cuts.

Bad as things are now, they’re getting worse. When public need keeps growing exponentially, government officials turn a blind eye. Where this ends, who knows. Expect much tougher times ahead.

America under either party is no fit place to live in. Expect the worst of times ahead. Duopoly power plans it. On November 6, vote independent or stay home.

Stephen Lendman lives in Chicago and can be reached at lendmanstephen@sbcglobal.net. His new book is titled “How Wall Street Fleeces America: Privatized Banking, Government Collusion and Class War” http://www.claritypress.com/Lendman.html.