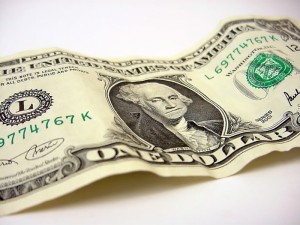 Stuff costs too much. Seriously. Every time I go to the grocery store these days, I am absolutely horrified by the prices. I try not to buy anything that is not on sale, but the problem is that I am discovering that the new sale prices are the old regular prices.

So now paying what used to be “full price” is supposedly a “good deal”. The other way that they are trying to hide rising prices is by shrinking package sizes. As if we wouldn’t notice that a box of 21 garbage bags is now being sold for the exact same price that a box of 25 garbage bags used to be sold for. It is one of my pet peeves. I feel like I am in the middle of some bizarre movie entitled “The Incredible Shrinking Dollar”. Sadly, I am far from alone.

There are millions upon millions of American families that are seeing their expenses continue to rise even as their paychecks remain the same. But neither Barack Obama nor Mitt Romney seems very concerned about inflation. In fact, the Federal Reserve, QE3 and Ben Bernanke were not even mentioned in any of the three presidential debates.

So I think that somebody should start the “Stuff Costs Too Much” Party. Inflation is a tax which is destroying the value of each dollar that we hold a little bit more every single day, and the American people deserve to know the truth about what is going on.

In this day and age, it simply does not pay to put money into long-term savings. When you finally pull your money out it will have far less purchasing power than it originally did.

Wouldn’t it be great if you could still get a gallon of gasoline for 27 cents?

But we don’t have to go all the way back to 1950 to find low prices. All we have to do is go back ten years.

A recent article by Benny Johnson detailed how the prices of many of the things that we buy on a regular basis absolutely soared between 2002 and 2012. Just check out these price increases…

So what will the next ten years bring? Unfortunately, we are already being told that it looks like inflation is going to start accelerating. A recent CNBC article started this way…

Consumers will have to dig deeper into their pockets next year to pay for costlier health care, more expensive grocery bills and higher taxes, an extra drag on the country’s already slow-moving economy.

That is not what millions of struggling American families need to hear right about now.

Their bills just keep going up but their paychecks are not keeping pace.

Have you noticed that almost everything that we spend money on just keeps rising year after year?

According to USA Today, in some areas of the country water bills have actually tripled over the past 12 years.

Has your paycheck tripled?

Electricity bills in this country have risen faster than the overall rate of inflation for five years in a row.

Winter is a really bad time for power bills. Millions of struggling families will set their thermostats very low this winter and yet will still be slammed with absolutely outrageous bills.

Of course just about every type of insurance is going up faster than the overall rate of inflation.

Have you gotten a price increase notice in the mail lately?

The price of health insurance in particular has soared in recent years. Health insurance premiums increased faster than the overall rate of inflation in 2011 and that is happening once again in 2012.

All of these price increases are pushing many American families to the breaking point.

But Federal Reserve Chairman Ben Bernanke insists that there is very little inflation right now, and he has government statistics to back his assertions up.

Of course the way that the government calculates inflation has changed more than 20 times since 1978, but Bernanke never mentions that.

According to John Williams of shadowstats.com, if inflation was measured exactly the same way that it was back in 1990, the official inflation rate would be about 5 percent right now.

The American Institute for Economic Research says that inflation is even high than that right now. According to them, the real rate of inflation was about 8 percent last year.

Meanwhile, household incomes are actually going down all over America.

Even though we are supposedly in the midst of an “economic recovery”, median household income has declined for four years in a row.

Overall, median household income has declined by more than $4000 over the past four years.

Incomes are going down and prices just keep on rising.

So how are families adjusting?

Well, many of them are spending less. One survey found that 62 percent of all middle class Americans have had to reduce household spending over the past year.

Others are going into increasing amounts of debt in an attempt to survive from month to month.

Inflation has become a way of life in America. But what could make it a whole lot worse is if a nationwide crisis suddenly disrupted the normal operation of the economy. If that happened, we would see price gouging happen literally overnight. Just check out what one article that was posted on CNBC said happened in the aftermath of Hurricane Sandy…

Four dollars for a can of coke. Five hundred dollars a night for a hotel in downtown Brooklyn. A pair of D-batteries for $6.99.

These are just a few of the examples of price hikes I or friends of mine have personally come across in the run-up and aftermath of hurricane Sandy.

So you might want to use your extra dollars right now. They are never going to be more valuable than they are today, and in the event of a major disaster they might lose value very, very rapidly.

Unfortunately, millions of American families don’t have any extra money at all. Many of them have been slowly worn down by this economy and are now just desperately trying to survive. The following is what one reader shared in a comment following one of my recent articles…

There is one thing you should know about poverty: it is crushing! It crushes the spirit first and foremost, then it crushes the idea of dreams because people in extreme poverty don’t see a way out when they barely have enough to eat let alone get ahead in life.

So, by offering a hand up to those in poverty, we relieve a bit of that pressure…just enough so that their basic needs are met. Once those needs are met, those in poverty can start to see “LIGHT”, something hard to see when being crushed by the pressures and hardships of poverty.

I know of what I speak; I was once living an upper middle-class life and enjoyed all the trappings of material and financial successes.

However, an accident caused that life as I knew it to end in a moment. I’m no longer able to work and for the past few years have barely been able to feed myself.

When I became homeless in 2010, I felt suicidal. My lowest moment was holding a sign asking for help very near the 6 bedroom home I once lived.

Don’t think that it can’t happen to you. What would you do if you suddenly lost your job and could not find another one? Would you be able to survive?

Just because you are living a middle class lifestyle today does not mean that you will be in the same position a year from now. The truth is that everything in your life can change in a single day. The following is from a comment that one of my readers named Kimberly left recently…

My husband lost his job of 20+ years to cut backs roughly 3 years ago, 8 months later his health declined of which I attribute to the depression he went through at not being able to find employment. I went back into the work force, or I should say tried… I’m a nursing assistant by trade but no nursing homes are hiring because the families are pulling their loved ones out because they cannot afford to keep them there, hospitals are not hiring because what jobs there are in my field go to nurses awaiting a nursing job and I’m sure my age (53) plays a role in it too. The closest hospital to us just announced it will be closing it’s doors on the 31 because despite it’s tries it cannot afford to remain open under Obamacare.

We have in the last couple years armed ourselves with a gun, started a garden and now do serious couponing to stock pile for emergencies which seem more and more each day are coming. We have dropped from a life lived on 65,000 – 75,000 a year to living on under 23,000 a year. We have made cut backs in every area of life and hope for the best.

We go to bed at night worried about tommorow, next week and next year .. you feel anxious all the time and panic attacks come more frequently with each passing day. I love the Lord with all my heart and I know He is in control, but am just human and one cannot stop the feelings that wash over them.

I have children and grandchildren and am scared to death what faces them in the coiming years. We all lived in within miles of each other until my children lost their jobs and could find nothing here in Mobile, Al. so they moved to Texas and have found at least some work… something is better than nothing you know. We are hundreds of miles apart now and rarely get to see them as gas is also so very high. I have a grand daughter I have never met because we cannot afford the trip and neither can they.

The U.S. economy has never even come close to recovering from the last economic downturn. If you doubt this, just read this article. Now the next economic crisis is rapidly approaching us.

If you think that the economic pain and suffering in this country are bad now, just wait.

We haven’t seen anything yet.

Things are going to get much, much worse.